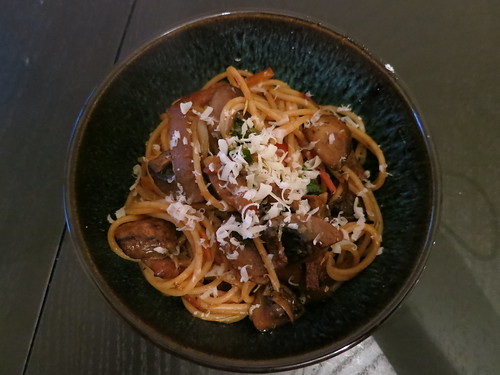 Man, it feels like I haven’t cooked a lot of Japanese-inspired recipes. Japanese cuisine is my absolute favourite — I could eat Japanese food every single day — breakfast, lunch, and dinner — and not ever get tired of it. True story.

But within this cuisine is an even more amazing sub-cuisine: yoshoku. Yoshoku cuisine refers to a more American-style influence on Japanese cooking. Dishes such as hamburg steak, potato salad, omurice, doria and my next feat, Japanese spaghetti napolitana.

Even within yoshoku, Japanese spaghetti has its own sub-category: wafu. Wafu is Japanese-inspired spaghetti. One of the coolest restaurants downtown in the West End of Vancouver is a cute little place dedicated to just that — Japanese spaghetti! The restaurant is called Spaghetei and and I swear, they cook the most PERFECTLY al dente pasta there is in town. I’m not even kidding. It’s almost like an art! It’s a hell of a lot better than the Italian restaurants that I’ve dined at. When the Japanese master a skill, they do it flawlessly. I urge you to try Spaghetei if you haven’t already done so.

Spaghetti napolitana is a very old recipe, dating back to post World War II. According to Wikipedia, one of the head chefs was inspired the spaghetti and tomato sauce that American troops were eating. The Japanese substituted ketchup for the pureed tomato sauce and added a few American frankfurts, sweet bell peppers, mushrooms and onions.

My version of the recipe was just that, except I adapted it to be vegan. Instead of the sausages, I doubled up on the mushrooms as my “protein” and and added some kale in there since I got a killer deal at the market the other day. It turned out wonderfully! Please note that yes, this is made with ketchup so this recipe will naturally be sweeter than say, a traditional Italian pasta sauce. I personally prefer my pastas to be savoury so freshly grated Parmesan was a must on this.

This might be weird to some but it is definitely something worth trying! You will find that this can be a very easy weeknight recipe since the featured ingredients are quite common to find in a typical pantry or fridge. Be adventurous and try something new! 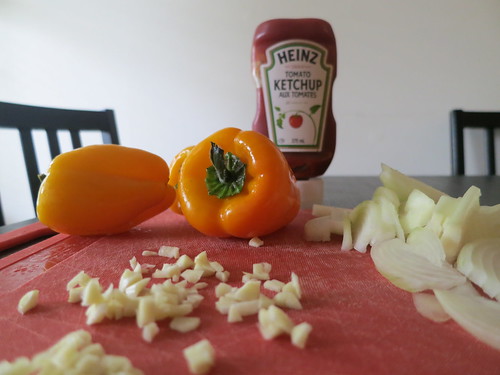 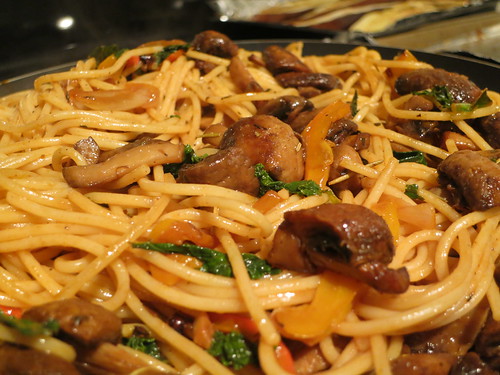 What you’ll need to do:
1. Cook your spaghetti in large pot of heavily salted water until al dente. Reserve 1/4 cup of pasta water. Drain, rinse, and set aside.
2. While your spaghetti is cooking, make your sauce. Begin by heating some ghee or vegetable oil over medium-high heat in a medium saucepan.
3. Once the oil is hot, add your onion and garlic and saute for 1 minute.
4. Add your sliced peppers to the mix and after 2 minutes of cooking, add the chopped kale.
5. Next, add the ketchup, Worcestshire sauce, and seasonings. Lastly, add in the mushrooms and reserved pasta water.
6. Toss the pasta together with tongs until everything is well incorporated. Serve into bowls and top with freshly grated Parmesan cheese. Makes 6-8 servings.